The Fraud Triangle Model: A Theory on Who Commits Fraud and Why

Have you ever considered what kind of people commit fraud, and why?  Research has revealed certain behavioral traits that are common among most people who commit fraud, such as living beyond their means, financial difficulties, entitlement, and belief of inadequate pay from their employer.  The surprising fact is that these individuals are not typically career criminals, liars, or even “bad people” so to speak.  The choice to commit fraud is typically more situational than psychological and is based upon what is known as the “Fraud Triangle”, as originated from Donald Cressey’s hypothesis (1973): 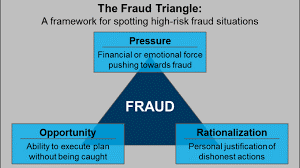 The “Fraud Triangle” can be used to determine the reasons why someone committed a crime after the fact, but it should also be looked at as a method of recognition and prevention of fraud.  Here is how it works:

The “Fraud Triangle” should always be considered in any type of fraudulent matters and it does not discriminate between petty retail crime, insurance fraud, or high-stakes business embezzlement.

Although each human being is unique, there are several behavioral signs that are very common among fraudsters.  According to the Association of Certified Fraud Examiners, Inc., the most common “behavioral red flag” displayed by perpetrators is lifestyle or living beyond their means (2016).

Desire for a lavish lifestyle is one of the top reasons individuals attempt fraud and continue to commit it over and over again.  Imagine taking an extra $200,000 from your company per year on top of your salary and you just purchased a $1,000,000 home.  This income would certainly have to continue in order to keep up on mortgage payments, maintenance, and other lifestyle changes you are bound to have made.  Similarly, when it comes to insurance fraud, particularly for personal injuries, you may have to keep up an injured charade for months or years on end if you want the insurance money to continue to pay out.

Sounds exhausting, right?  The lifestyle of a person who commits fraud seems to be a vicious cycle, and one that most people do not consider the end game of before making the first move… Once a fraudulent statement has been made, money taken, or fake bank account created, it is essential for the individual to keep up with this scheme to avoid detection.  To stop funding a fake bank account or stop writing checks that have been issued every month for years would be more suspicious than to continue the illegal activity.  In a fraudster’s mind, it is safer to keep up the scheme until they are caught, as someone might notice the change if the decide to call it quits.

In an embezzlement situation, some trigger events and indicators are: very protective of work and work space; protective of accounting systems; “odd” behavior or uncooperative; sense of entitlement; big spending habits (and boasting); lavish vacations (or not taking any vacations); expensive hobbies; and intimidating others.

So, what can be done to prevent fraud from occurring in the first place?

When it comes to preventing fraud as an attorney, insurance company, or anyone on the defensive side of the situation, a thorough investigation is crucial.  Surveillance, criminal and civil history research, obtaining a driving record, social media investigations, family member or witness interviews, and other tactics can be used to really capture a good look at an individual’s entire lifestyle and their daily activities, as we know a criminal history is not always the most revealing behavioral red flag when it comes to fraudsters.

Often, civil matters can be more revealing than a criminal history.  A full background investigation can expose more than just criminal records.  Someone may appear to have a “clean slate,” but maybe they just filed for bankruptcy, or maybe they owe $100,000 in taxes.  Perhaps they are claiming they can never work again, but in reality, they just started their own business.  Many individuals hold professional licenses as well and renew them, while claiming they cannot work.  This is why it is so important to investigate an individual as a whole.

Other ways of preventing fraud within your own work place would be the separation of responsibilities and tasks between the individuals who handle company money and assets.  Ideally, there should not be one person writing and cashing the checks, at least without an additional person’s approval required.  Email and/or text notifications should be set up through a company’s bank.  A business owner should also conduct routine checks of the company’s bank records, as well as corporate credit cards.  Set a company policy that all new vendors being paid are real entities and not merely shell companies set up for illegally funneling a company’s money through.  The more checks and balances within the company, the less access and opportunity for unwanted activities.  Running diligent background checks on employees and/or investors is essential prior to hiring but is also useful to revisit after their onboarding date.  More than anything, knowing these behavioral red flags, practicing open communication within a workplace, and separating tasks appropriately will increase your awareness of your employees’ intentions and keep the state of your business safe from theft.