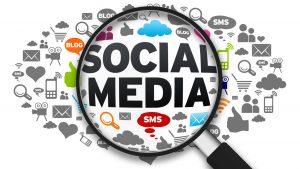 Since the early 2000s, social media has been the go-to for posting vacation photographs, celebrating birthdays, and connecting with friends and old classmates.  Today, social media is a multi-billion dollar industry and offers up-to-the-minute news, information, and social interactions. The various platforms also offer a myriad of ways to share, create and spread content.

These platforms have led to a new generation of “influencers” who post their thoughts and opinion, and as a result, the lines between fact and opinion or the physical and the digital worlds have started to blur.  The platforms have also been mired in controversy, as they have been widely used to fuel disinformation and propaganda campaigns around the world (i.e., Russian interference in the 2016 U.S. presidential elections; COVID-19 vaccine disinformation), as well as influence public opinion. In fact, Facebook began partnering with third-party fact-checking firms in 2016 to prevent the spread of misinformation. Additionally, Elon Musk, who is in the process of acquiring Twitter, claims that 20% of the platform’s users are either bots or fake/spam accounts. Musk further claims that the deal is on hold and cannot proceed until the social media company can prove its estimates that only around 5% of the users are bots or fake/spam accounts.

Social Media’s Influence on Due Diligence

However, the process of examining social media profiles can be time consuming for hiring organizations and can also lead to legal issues – the main hurdles being bias and adhering to the standards of the Fair Credit Reporting Act (“FCRA”). To circumvent bias, hiring organizations should use respected third-party due diligence firms to conduct objective social media checks on applicants. And to be FCRA-compliant, hiring decision makers must make certain disclosures if they reject a candidate based on their social media content. The candidate also has the right to know why they were rejected. Under FCRA, applicants are barred from being rejected over religious and political views, race, gender, sexual orientation, etc.

At Subrosa, we search all major social media platforms and provide an opinion-free overview of the types of content in the profiles. We also check posts and images against specific risk categories, including hate speech, insults/bullying/obscene language, drug use, violence, and terrorism/extremism, to name some.

Our social media checks also factor in the number of followers of a specific account, as well as the person’s position within a company. As stated above, social media platforms have led to the creation of social media “influencers” or users who harness their large follower bases to market specific content, products and/or services. According to traditional media, the influencer industry has seen incredible growth in the past several years – going from a $1.7 billion market in 2016 to an almost $10 billion market in 2020, and to a nearly $14 billion dollar market in 2021. Influencers can range from Fortune 500 executives (i.e. Elon Musk) to celebrities (i.e. Selena Gomez and Justin Bieber) to companies (i.e. Nike) to everyday people (i.e. Khaby Lame and Kayla Itsines).

So, is it noteworthy if your subject is a social media Influencer?

The challenge with Influencers, especially if they are company executives with positions of power, is how to separate your personal brand and views from that of your company. And as influencers need a large following to influence, how do you communicate to your audience that these opinions are your own in an effective way? Also, what if the influencer has opinions and beliefs that differ from that of the mainstream or even from their own companies?

A prime example of this issue is the story of Jennifer Sey, the former president of Levi Strauss & Co. who was on the path to becoming CEO of the company. However, during the COVID-19 lockdowns, Sey, who has about 70,000 followers on Twitter, used social media and traditional media outlets to post against the school lockdowns. Sey claimed in a self-authored essay that the company used her personal opinions on social media to oust her, even though Levi’s stock price had doubled under her leadership and revenue had returned to pre-pandemic levels. Sey further claims that she was the subject of social media attacks calling for her firing or calling for boycotts of Levi’s products. Sey also claimed that the company monitored her tweets and other social media posts daily and they were reported to the CEO by the head of corporate communications. Sey eventually resigned and turned down a $1 million severance package.

In closing, social media platforms are here for the foreseeable future.  How social media fits into the Due Diligence process is a complex topic and what one person may deem a controversial post, someone else could see no issue. At Subrosa, we understand that everyone views social media differently. So, if you or your organization are seeking social media checks, it is always best to have a conversation with us first.